Today are the primary elections and there is still time to have a voice. Ballots can be dropped off at official sites by 8:00 pm this evening. The following post is about the process, how you vote is totally up to you. However, for those of us who work for or with the social profit community, there will be an impact on either how we do things, the communities we serve, and/or the supporters who are our lifeblood.

Also, if there are issues near and dear to you like the environment, home-ownership, the arts, there are like-minded organizations who have taken the time to interview and vet the candidates/issues as well so seek out the Oregon League of Conservation Voters or Portland Metropolitan Association of Realtors Association among others.

But this isn’t a presidential year, so why does this matter? There are many key positions in local government and initiatives that show up on the primary ballots and only about 35-40% of eligible voters vote. Therefore, just over 1/3 of your neighbors are making decisions that can have direct impact on you and your livelihood.

For instance, Multnomah County Chair will weigh in on decisions about who should pay for the Willamette River bridges, should the county ease the tax burden on business owners (at the expense of county programs) and how deeply should the county get involved in economic development (i.e. boost job growth). The County chair’s opinion matters and will help shape these and other similar issues. Who speaks for you?

Seven people are on the ballot running as chair, but this hard-fought race boils down to Deborah Kafoury, a former state representative, and Jim Francisconi, a former Portland city commissioner. If neither wins a majority, the race heads to a runoff and continued campaigning from both, using up valuable time and resources that could be focused on actually being the chair.

Do you drink, bathe in, wash laundry with, or garden using water? (Oh, I do hope the answer was yes) Well, this ballot contains a pretty important vote on whether to establish a separate water district with a different oversight body than city government. Take a look at the voter guides for the potential impact this shift has.

If you work for or have children who attend Beaverton schools – The school district is asking for a $680 million construction bond to build news schools, repair others, and buy new computers.

Voters in Jackson County will decide whether to allow a ban on genetically modified seeds. The measure has drawn national attention and more than $1 million in campaign funding (raised by opponents, most of which are out of state) to the community, which has only 117,650 registered voters. Clearly, #midtermsmatter.

Locations for dropping off your ballot by 8pm tonight. View here. 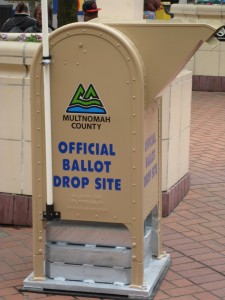 Get involved and VOTE! #midtermsmatter2014